With the Christmas cantata by Giovanni Battista Pederzuoli (1630–1689), the Hof-Musici ensemble presents another unjustly forgotten composer of the Italian Seicento, whose work is associated with the Viennese imperial court.
He was born in Chiari (in the area of Lombardy under the rule of the Venetian Republic) and studied in Brescia under Francesco Turini, a native of Prague and former organist to Rudolph II.
Between 1648 and 1665 he held the positions of organist and kapellmeister in various churches in his native Chiari and Bergamo. In 1665 he moved to Vienna, where he first became organist in the ensemble of the Empress Dowager Eleonora Gonzaga of Mantua, then later, in 1682, he replaced Antonio Draghi in the prestigious position of the same ensemble’s kapellmeister.
After the Empress’ death on December 6, 1686, he was retired; in 1688 he left for Venice, where he became a music teacher and choirmaster at the Ospedale degl’Incurabili – one of four famous Venetian educational institutions for orphaned girls. He died on 20 October 1689 of the following year, however, and was buried in the church of the Ospedale degl’Incurabilii – the building was demolished in the early 19th century.

Compared to his colleague Antonio Draghi, Pederzuoli’s work is not very extensive. Only 18 scores have survived in the private collection of music by Emperor Leopold I (Eleanora’s stepson), stored today in the Austrian National Library in Vienna (Österreichische Nationalbibliothek).
In addition, we know of only one madrigal in the archives of the Order of the Oratorians in Naples (Archivio Musicale dei Girolamini). This small amount of compositions, however, includes all the essential dramatico-musical genres cultivated at the Viennese court – cantatas, celebratory serenatas, operas, oratorios, and sepolcri. A brief glance at these works is sufficient to confirm the undeniable quality of these works – especially Pederzuoli’s ability to capture the affetti contained in a text set to music using heartfelt melodies, strong harmonies, and an impressive use of chromatics.

Pederzuoli’s Trialogo nel Natale del Signore (Trialogue on the Nativity) is a Christmas cantata – while small in scope, its form and content rather suggest a kind of miniature oratorio.
The unique manuscript score is not dated and, apart from the named author of the music, does not provide any further information on the purpose and performance of the composition. We can expect a performance to have been held in Eleonora’s private chapel (non-existent today) in Vienna’s Hofburg, sometime between 1665 and 1685, when Pederzuoli was in the Empress’s service; it was probably performed during a Christmas vigil, as the libretto of the composition suggests.

The story of the Nativity is presented here as a typical Baroque antithesis connecting Heaven with Earth. Three allegorical figures – L’Umanità (Humanity), La Notte (Night) and La Divinità (Deity) – herald the birth of Jesus Christ. Both “secular” figures (L’Umanità and La Notte) express their astonishment that God has reduced himself to taking on the form of a naked human child shivering in a crib in a cold cave.
With typical Baroque abundance, the poetic text accumulates contradictions and paradoxes, as was typical of Italian poetry of the 17th century. Images of Spring’s arrival in the middle of winter, a miraculous sunrise in the middle of night, supernatural Light banishing the darkness of the world, and rocks providing refuge to the newborn Infant in contrast to the hardened human heart, etc. alternate in quick succession.
The figure of the Divinity (La Divinità), on the other hand, brings a paraphrase of the angelic hymn Gloria in excelsis Deo et in terra pax hominibus bonae voluntatis (Glory to the Highnesses of God and on earth peace to men of good will). The final tercet Dormi, dormi, o bel Bambino (Sleep, sleep, O beautiful Child) is a captivating lullaby at the Nativity Scene. Here, too, there is a contrast between the macrocosm and the microcosm – the harmony of the spheres and the love of the human heart. 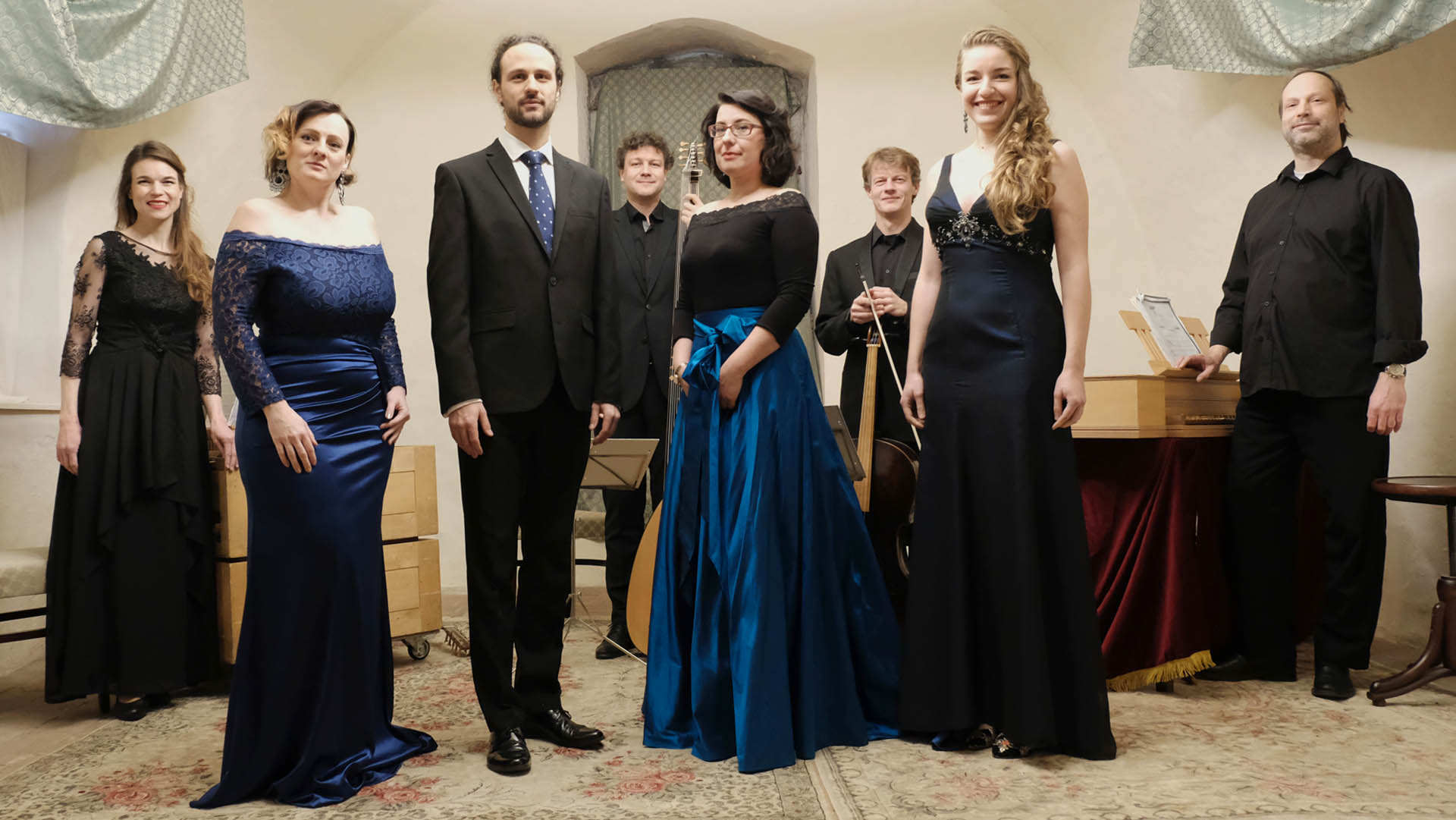 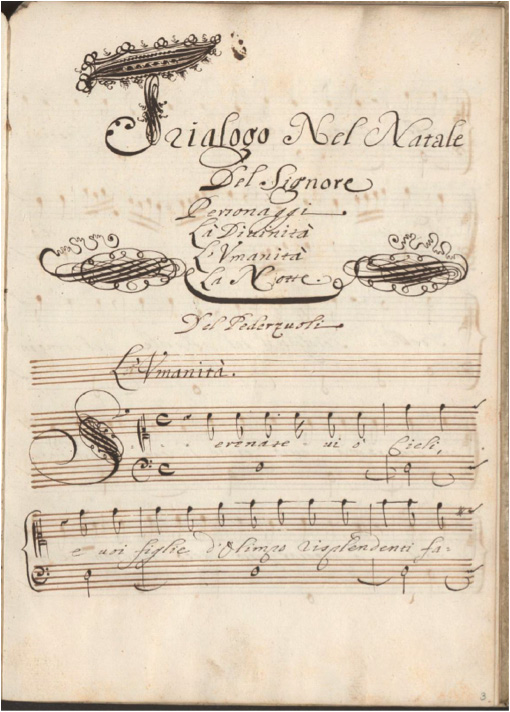 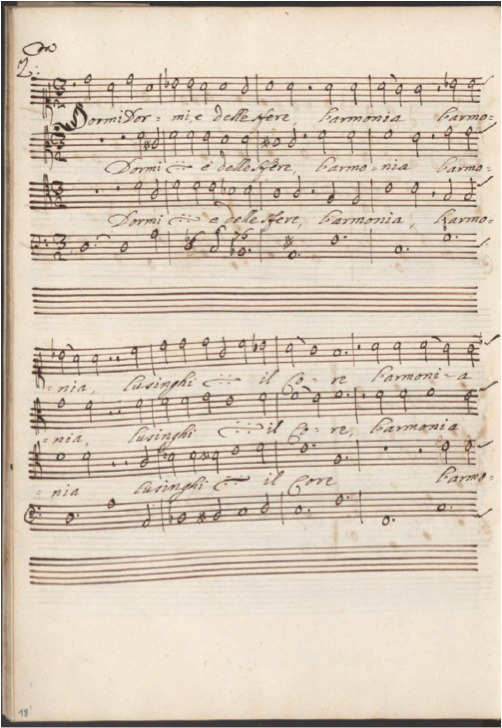